Vinnie, full name possibly being Vincent, is one of the main characters voiced by Ian Ziering and the resident hothead of the trio.

Vinnie was a Freedom Fighter back during the Martian-Plutarkian War on Mars. Like Throttle and Modo, he was trained by Stoker, the founder of the Freedom Fighters. In riding and fighting, Vinnie is actually the closest to Stoker's style, something that actually caused the young mouse quite the inferior complex back on Mars: even his howl is quite similar to the ex-leader.

He was injured in the same explosion that cost Modo's right arm, Throttle's eyes and burned and scarred the right side of his face. It was later covered with a flex-plate shielded mask given to him by Harley.

At the beginning of the series, he was travelling in space with Modo and Throttle (for unexplained reasons ) until their ship was shot down by a Plutarkian destroyer and landed in Chicago. Here, he and his bros found out about Limburger, a Plutarkian in disguise who was trying to strip mining Earth-like Mars was. Unable to return home for the moment, they decided to remain in Chicago to stop him, with the help of the human mechanic Charley Davidson.

Vinnie is a muscular Martian mouse with white fur. Having been damaged in battle, he wears a metal mask on the right side of his face. He has two studs in his left ear. He is usually shirtless, though he wears a green X-cross bandoleer on his bare chest, and wields expanding flares as well. He wears the Biker Mice signature belt with dark blue jeans and studs on the sides. He has the usual shin-guards and black boots. He is also the shortest of the Biker Mice, but taller than Charley.

His bandoleer is equipped with different kinds of flares. Some are burners for melting metal, and some are bombs, capable of creating explosions or simply a source of light.

In the 2006 version, Vinnie's bandoleer has pockets that hold different energy powered shurikens. They seem to replace the flares. Some are explosive. In "It's the Pits", he uses the flares again, commenting that it was "old school, but feels right." He uses them again is "Driver's Ed" to cut a hole in a Catatonian vehicle to throw in explosive shurikens.

Vinnie is undoubtedly the most reckless and risk-chaser of the group. He will gladly take on the most dangerous tasks for himself, and his idea of a good time is facing the biggest threat to his life he can find. As shown in the "Biker Knights of the Round Table", a week without fighting leaves him an angry, nervous wreck, and goes around punching holes through brick walls due to frustration.

Despite his bravado, he actually suffers from an inferiority complex towards who he believes more skilled than him. This was particularly evident back on Mars, where he would try to imitate and surpass his mentor Stoker (which often ended in failure), and he was worried about not having a chance with Harley due to Stoker also having a crush on her.

Despite considering himself a lady-killer and a Casanova, he is actually pretty shy with women. When flirting, Vinnie is confident and doesn't feel disheartened when brushed off, though when receiving affection, he blushes and acts bashful (such as when Charley blew him a kiss in "Road Ravens").

Throttle: Vinnie is extremely close to the leader of the Biker Mice, and at times acts like an annoying younger brother to him. He respects him enough to trust him and follow his orders and strategies on the battlefield (even if he sometimes ask to change Throttle's tactic with another that makes him look cooler).

Modo: Vinnie and Modo have a deep friendship tinted with an air of younger sibling (Vinnie)- older sibling (Modo) dynamic.

Charley: Vinnie has shown to be attracted to Charley since their first meeting in "Rock and Ride!", and has been playfully flirting with her since then. He has been shown to be jealous when other people considered her attractive (Stoker) or she was infatuated with someone else (Sir Lancelot). While it has never been clear if he is actually in love with her, he is extremely protective of her, often refusing to bring her in battle with them. Threatening her is a sure way to make him lose control ("Back on Mars" part two). 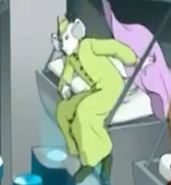 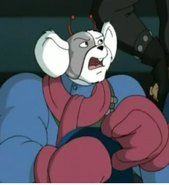 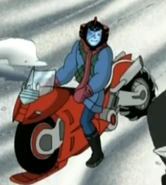