Throttle is one of the main characters from the show and is voiced by Rob Paulsen. He is the leader-figure of the trio and has orangish-tan fur. Throttle's vision was damaged in the same incident that caused the losses of Modo's arm and the right side of Vinnie's face. As a result, he wears green sunglasses with field spec capabilities.

While fighting the Plutarkians on Mars with the rest of the Freedom Fighters, Throttle was being groomed by Stoker as the next leader. During a mission to destroy the Tug-Transporter, he, Modo, and Vinnie were badly injured and captured. Karbunkle switched his eyes with robotic ones, but he failed to calibrate them properly: as such, without his helmet or his sunglasses (which were given to him by Stoker) he sees completely white.

He, Vinnie, and Modo crash-landed in Chicago after a Plutarkian warship shot them down and started fighting in Chicago to save Earth from the Plutarkian infiltration.

In the 2006 version, Throttle is less muscular and is younger-looking. His fur is slightly more shaggy, especially the longer locks on his head. His sunglasses appear different. He loses the tattoo on his right arm and his whole vest is black. In addition, he wears a green cross-belt from his left shoulder. His pants are normal jeans with the Biker Mice's new signature red belt and the Martian symbol, his being blue. Underneath is a pistol holster also fastened around his left leg. He no longer has shin-guards and the straps on his boots are now brown.

In the 1993 version, he wears a cestus on his right hand, called "Nuke Knucks", which increases the strength of his blows with that fist. He also has a Laser pistol as another weapon of choice.

In the 2006 version, he continues to carry a laser pistol, but now has cestuses on both hands, which can blast lasers when in fists. In "Cat and Mouse", his lens have a wave coding function for storing and protection from hypnotic waves.

The 2006 Version of Throttle 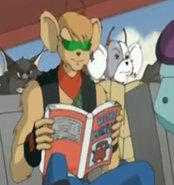 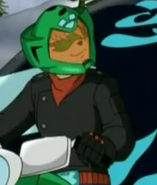 Retrieved from "https://bikermice.fandom.com/wiki/Throttle?oldid=5192"
Community content is available under CC-BY-SA unless otherwise noted.