Modo is one of the main characters and the strongest member of the trio. He is voiced by Dorian Harewood.

Like Throttle and Vinnie, Modo was a Freedom Fighter back on Mars during the Plutarkian Invasion, where he was trained by Stoker. They were considered the bravest warriors and the heart of the resistance ("Once Upon A Time On Mars"). Modo lost his right arm and left eye in the same explosion that scarred Vinnie's face and destroyed Throttle's eyes, and the three were captured. He was given his robotic arm by Karbunkle, who planned to brainwash him to create a bionic slave. However, Modo woke up too soon and used his new weapon to free himself and his comrades. They then (with Rimfire's help) stopped the Tug-Transporter from bringing Mars to Plutark.

In the 2006 reboot, he was as big as his 1993 counterpart, but his appearance varied slightly as his face is shown to be more chiseled, his hand has claws, and he has a kink in his tail. His bionic arm is slightly different in the reboot as well.

Modo is the most laid back and the gentlest of the Biker Mice; while he enjoys the thrills of fighting bad guys, his idea of a perfect day is a quiet fishing trip, especially with his nephew Rimfire. He is, however, capable of quick to rage if someone threatens Charley, his bros or his bike. He hates being called a rat, even if it's one of his bros as a joke ( "Bleu Cheese Bros"). The times he's been called a rat, his right eye usually glows red.

Modo is also very respectful of women, to the point of coming out as slightly old-fashioned (something Billy Monnei was able to take advantage of in "Unforgiven Cheese" ) and has a soft spot for children. Most of his mannerisms come from his mother's teachings.

He is also the mouse with the closest relationship with his motorcycle; he is often seen cleaning it and talking to it as if it was a person, and he even gave it a name: Li'l Hoss.

Despite the great strength his robotic arm gives him (he was able to catch a falling truck in "Steal of the Century") and its built in laser, Modo has some mixed feelings about his robotic arm, especially since it was Karbunkle who built it. 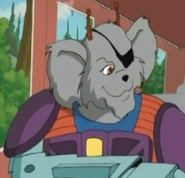 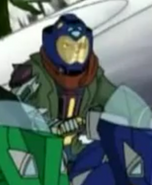 Add a photo to this gallery

Retrieved from "https://bikermice.fandom.com/wiki/Modo?oldid=5190"
Community content is available under CC-BY-SA unless otherwise noted.