Biker Mice from Mars Wiki
Register
Don't have an account?
Sign In
Advertisement
in: Characters, Mice, Females,
and 6 more

Carbine is a minor female character in the series. She is a General of the Martian Mice Freedom Fighters. Carbine is also a trusted ally to Throttle, Modo, and Vinnie.

The deputy leader of the Freedom Fighters on Mars. A respected General in the Martian Army, Carbine joined Stoker's Freedom Fighters when she realized the army was not doing any good against the Plutarkians. Carbine is Throttle's girlfriend, although their relationship is fragile for some reasons due to the long distance between them. In the 2006 revival, she is revealed to be Stoker's niece.

Tough-as-nails, stubborn and proud. Though Carbine has a bit of a soft scene for Throttle, as they have a sort of relationship.

Carbine has long black hair with gray fur and pretty brown eyes. Carbine had her triple ears pierced on her left side. Carbine is wearing a red alien antenna headband with tomboyish yellow and green fashion. After her battles as a freedom fighter she gained a scar over the left side of her nose. 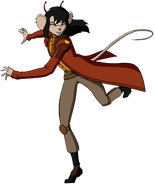 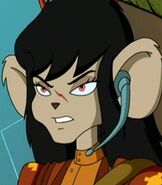 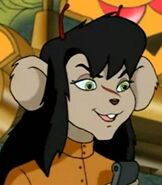