Biker Mice From Mars is a Super Nintendo Entertainment System racing video game made in 1994 by Konami, based on the animated series of the same name.

The object of the game is to take on the role of one of six racers, Throttle, Modo, or Vinnie, Lawrence Limburger, Dr. Karbunkle, and Greasepit, in a series of motorcycle races, on different tracks that are displayed in isometric projection. After each lap, the player's missile pack is refilled used to knock off opponents. Also the player has a random bonus choice for additional cash, invulnerability, nitrous oxide acceleration or an encumbering earthquake. The winner gets the prize money and the losers have to start again.

In between rounds, upgrades for engine, tires, food and weapons can be purchased from the Last Chance garage using the prize money.

backsides of the video game cover. 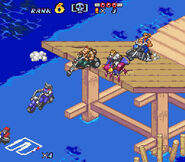 Screenshot from a race. 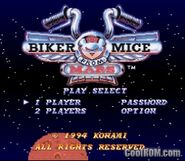 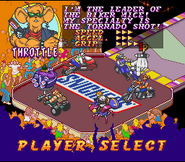 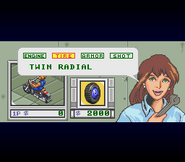 Charley
Add a photo to this gallery

Retrieved from "https://bikermice.fandom.com/wiki/Biker_Mice_from_Mars_(1994_video_game)?oldid=5284"
Community content is available under CC-BY-SA unless otherwise noted.