Biker Mice from Mars is a science fiction action animated series created by Rick Ungar that began airing in 1993 in the United States and lasted for three seasons before its cancellation. The mice's weapons of choice consist of a Cestus and a Laser (Throttle's two signature weapons), a Bionic arm (Modo's signature weapon), and Flares (Vinnie's signature weapons); thus no blood is shown, no firearms are used and many villains are monsters, aliens, and robots. These elements allowed the show to still be considered suitable for children.[1][2][3]

On the planet Mars, there existed a race of anthropomorphic mice who enjoyed motorsports per very similar culture and society to that of humans. At some point in time, they were all but wiped out by the Plutarkians, an alien race of obese, foul-smelling, fish-like humanoids who exploit other planets for natural resources because they have wasted all of their own. Three survivors, Throttle, Modo and Vinnie, manage to escape the Plutarkian takeover but are soon shot down by a Plutarkian warship and end up crash-landing on Earth in the city of Chicago. They meet a charming female mechanic named Charlene Davidson and discover that the Plutarkians have arrived on Earth as well. All the digging operations are commanded by a Plutarkian in the guise of Chicago's leading industrialist, Lawrence Limburger, and his two henchmen, mad scientist Dr. Karbunkle and the idiotic Greasepit. To defend Earth from their similar fate back home, the Biker Mice from Mars ride as the windy city's heroic vigilantes to save the day and thwart Limburger's plots as payback for their home. As a running gag, all of Limburger's foiled plans end with his business tower destroyed at the end of nearly every episode.

The Biker Mice from Mars returned to TV screens in 2006 as a continuation of the story.[4]

The new series launched in autumn of 2008 in Italy on Italia 1, and on August 1 of the same year on 4Kids TV on FOX. The series is on hiatus in the US, but according to the official website (www.bikermice.tv) would return later in 2009, on CW4Kids. However, as of 2012, it has yet to return to US airwaves.

The series also launched successfully in Finland on MTV3 and in Australia on Channel Ten in October 2006.

A Biker Mice from Mars video game was released by Konami for the Super Nintendo Entertainment System in 1994. The European version features extensive advertisements for Snickers candy bars.

In 2006, Biker Mice from Mars was released based on the 2006 Revival in Finland, Australia & The United Kingdom for the Nintendo DS & Sony PS2 consoles.

In 2015, Biker Mice from Mars was released for Apple iPhone, iPad and Android devices through the App Store and Google Play Store. The game is divided into episodes, each with a different storyline which unfolds as the player completes the levels. Commenting on the new game, series creator Rick Ungar said that Biker Mice fans would enjoy the snappy banter, classic catchphrases and irreverent satire that they would expect from the series, in addition to the non-stop action.

Marvel Comics published a three issue series in the early 1990s. A fourth issue was solicited on the reader's page. Marvel UK published its own series. The whole American series and portions of the British series were published in Germany (also by Marvel UK) in 7 magazine-sized issues from 1994 to 1995.

The first 13 episodes of Season One was released on DVD in the UK by Maximum Entertainment.[14]

In the USA in 2008, Exposure Enertainment had released the 1st season on DVD as a two disc set.[15]

Both the UK and US sets are now currently out of print.

An online petition demanding the release of the full original series in DVD has so far collected the signatures of several hundred fans from around the world,[16] representing a growing community of fans numbering thousands of people on Facebook.[17] 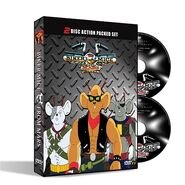 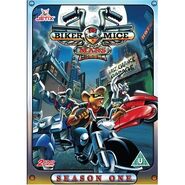